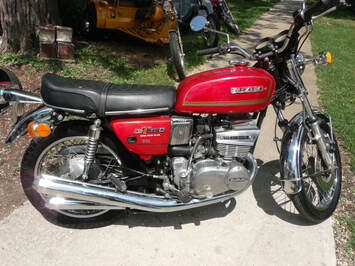 Let's see:
I've been to a few places. I'm telling all once you come inside. Maui,  Hawaii for my 60th, Ocean City Beach on the bottom of the Peninsula, Maryland, then some home time and off to Guanacaste Beach Region , Costa Rica early July, return and turn around and drove to St. Louis, Missouri to load up a friends van and drive them to Las Vegas, Nevada. Drive back to St. Louis, Missouri, then hop on a Texas Eagle Amtrak for a relaxing overnight ride
home. Get home, and off a day later to see the grand-babies for 6 days
down in San Antonio. Whew!  That was just from April thru September, 2014. Later, 8/7/14  1800 hours
----------------
I was involved in a death defying (2 times!) motorcycle accident on June 30th, 1974, seven days before I was to ship off to boot camp. I had enlisted in the U.S. Air Force in May of 1974 and immediately went out a bought a 1974 Suzuki GS 750 crotch rocket (in those days) as I didn't think that I would be able to get one after boot camp. It's amazing how that one stupid, impulse idea would alter the course of my life. Somewhere down the line I will have my life story for those that may be curious as to exactly what happened and how I overcame odds, obstacales (“Know that there is something inside of you that is greater than any obstacle.” - John A. Passaro), and gained perseverance.